Before she had the private audience with Indira Gandhi, before the Lord Mayor of Sydney, Australia, fell in love with her name and asked her to tea, before she was stranded in Tehran during a wild Persian New Year’s celebration or spent a night on the earthen floor of a hut in Papua New Guinea in the company of missionaries, Sabina Shalom was stuck in an elevator with a man smoking a cigarette.

Shalom pointed out the clearly marked sign that said “no smoking.” She told the man that she had bronchial problems. “I don’t care if you drop dead, lady,” he said, churlishly. And he kept smoking.

If there’s anything anybody knows about me, It is that I never give up.

Well. “If there’s anything anybody knows about me,” Shalom says, “It is that I never give up.”

And she didn’t give up on the man who was smoking in the elevator. She found out his name and reported him to the police. Eventually a judge fined the man $250, which was a lot of money in 1976.

Her elevator encounter took place in Miami Beach, Florida. She and her husband, Marco, had recently moved there from Columbia after Marco’s company had reassigned him to the new location.

Shalom has a knack for garnering publicity, and her stand against the elevator smoker, besides generating numerous news stories, won her the undying gratitude of the American Lung Association. She served on the board and later received a lifetime achievement award. 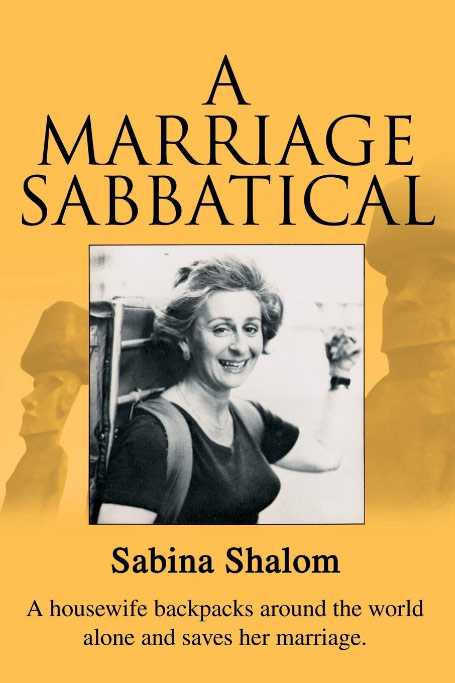 But the thing that she is perhaps best known for is her book, A Marriage Sabbatical, that was published in 1984 about her 50,000-mile trip around the world in 1976.

She traveled by herself, but not because she was unattached. She undertook the journey as a sabbatical from her marriage, where she felt her life was stagnating, despite the satisfaction she got from volunteer work like hospice care and reading to the blind. It worked, too, ultimately cementing her relationship with Marco that had been floundering in suburban Florida once her two sons had grown and left home.

Shalom is the sort of person who would literally bump into a friend at far-away London’s Heathrow Airport (she clipped him with her backpack). He happened to be an acquaintance from Bogotá who was married to an Iranian woman. And on the spot he invited her to come and stay with them in Tehran.

So, after visiting her native England and stopping by in Paris to see her lifelong friend Naomi Rothschild, she flew to Tehran, where she missed the meeting with her hosts (they hadn’t gotten her telegram) amidst the crush of new year’s revelers.

She ended up leaving the airport in the company of some men who offered to help her find a place to stay in the chaos of the holiday. They found refuge in a sparsely furnished house far from town in what could’ve been a bad situation. But this was Sabina Shalom, and everything worked out fine.

Next stop, India, where she saw the Taj Mahal when there were virtually no other tourists present. The appalling poverty and homelessness that she saw in Delhi, now Mumbai, scarred her so badly that she went to office of the prime minister of India, where she requested and got a private interview. Indira Gandhi shared her own heartbreak over the country’s poverty, and they also discussed feminism and the Equal Rights Amendment.

In those simpler days, it was possible to buy an around-the-world fare from Pan American World Airlines for about $1,200. To save money, she resolved to stay in as few hotels as possible and to hitchhike — hitchhike! — when needed. She says she only stayed in a hotel once, often bunking with people she met on the way, and she saved on restaurant meals by packing Sego bars and buying cheese, fruit and crisp breads at local markets.

Her travels took her to Paris and Malaysia and Hong Kong and to less developed nations such as Papua New Guinea and Tonga.

It was just Shalom, her backpack, her duffel bag, a handful of Sego bars and her own indomitable spirit that took her around the world in about six months.

Fast forward to now. Upon her husband’s death after 62 years of marriage, she was living in Bethesda, Maryland, when it became apparent to her that she wasn’t going to be able to live by herself anymore. Her research into Jewish retirement homes brought her to Portland, where a granddaughter lives, and she fell in love with Rose Schnitzer and its beautiful grounds. She has lived here about three years.

Now 96, Shalom is still active despite having had multiple heart attacks and mini-strokes. She survived tuberculosis as a child and has had bouts of cancer. She also survived World War II in her native Britain, where residents huddled in air raid shelters during the Nazi blitz.

A life of volunteerism, social work and helping others brought her into contact with many luminaries. While visiting the U.K. during a promotional tour for her book, the British Lung Association invited her to a reception with Princess Diana. She met the princess and received a sweatshirt that the princess wore as a memento.

Her work after the Second World War in France, with children who had survived the Holocaust, brought her into contact with a 17-year-old boy named Eli. Many years later, when she met him at a book event, she was able to confirm that the boy she knew in the 1940s was indeed Elie Wiesel, the Holocaust survivor and Nobel laureate.

Throughout her life, Shalom has excelled at meeting and connecting with people. The genesis of the marriage sabbatical was an invitation to visit Australia and meet with a couple her husband had known, but unfortunately they had to travel back to England to visit a dying relative. She never did connect with them, but at one point she happened to call City Hall and the phone was answered by the lord mayor, who was Jewish. He was so taken with her lovely name that he called her back and invited her to tea.

She even arranged a photo op with the king of Tonga.

In one near disaster, she took a bus into the mountains of Fiji without a clue where she was to spend the night, something she did often in her travels. In this case the “hotel” at the end of her journey turned out to be a brothel. She spent an anxious night barricaded in her room, only to travel on unscathed the next day.

Near the end of her travels, she visited the bleak landscape of Easter Island, barren except for the huge, mysterious monoliths left behind by an unknown people. There she had a series of epiphanies about finding strength in loneliness and joy in independence, finally teasing out her place in the world and in her marriage and feeling a great sense of peace.

Even so, it was tough returning to her mundane life in Florida. But the task of writing about her adventures, and thinking about the changes she had undergone, brought her back to that place of peace. And although he had his own adjustments to make, her husband, Marco, remained devoted to her.

Her marriage sabbatical had worked!

A few extra copies of Sabina Shalom’s book, A Marriage Sabbatical, have been ordered for the RSM library. If you borrow one of them, please be considerate in returning it as soon as possible so that others can enjoy it.

Learn more about Sabina Shalom, by visiting her website here.

Fran Gardner is a retired journalist and a resident of Rose Schnitzer Manor.