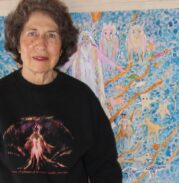 When Jeanine Semon’s husband, Ed, used to leave for work every morning around 7:30 a.m., he would advise her to stay off the phone until after noon.

“That’s all he’d say,” said Jeanine, with a chuckle. “He knew my high-energy painting time was nine in the morning. And then after 12:30, he knew I’d painted. And he was right.”

Ed Semon recently passed (April 25, 2022), but even while grieving, Jeanine can still feel his quiet support in her artistic endeavors.

“I’ve been painting for more than 65 years,” said Jeanine. “In all that time, Ed never had an opinion, a preference about my work, neither criticism nor compliments. All he did was go along with what I wanted and he was always there to help with the children or cooking or whatever I needed, whether it was driving the car to New Mexico and West Virginia to show and teach, or to art museums and galleries in Chicago and Madison. He was a wonderful man.”

Jeanine Gassman grew up in Portage, Wisconsin. She attended University of Wisconsin in Madison for a year, then transferred to Parsons School of Design in New York to study costume design.

“They were mediocre classes,” said Jeanine. “So, I left and got a job working at the Red Cross.” It was during that time that Jeanine met Ed Semon. They married and had two boys, Bruce and Jesse. Later, Betsy would follow.

One day when she was 26, Jeanine took her sons—so small they occupied the same buggy—to the Milwaukee Jewish Community Center. There was an art show on view.

“I didn’t know there was an art exhibit,” said Jeanine. “I looked at the paintings, and was electrified. I went out to the desk and asked where the art had come from, and they said that there was an art class on Wednesday nights at seven. I said, ‘That sounds perfect.’

“The following Wednesday, I was in that class, and from there I never stopped painting.”

In the beginning, Jeanine concentrated on Wisconsin landscapes. She grew to love the native American philosophy of nature and its respect for creatures and trees. She made jewelry and learned stain glass. She began to have galleries of her own, and she taught art classes in Menomonee Falls, Wisc., Flagstaff, Arizona, and Rome, Italy.

“I was always meeting people that connected me,” said Jeanine. “I’m a person that opens the door when it’s offered.”

Jeanine describes her work as “healing art,” images that “give joy, comfort, and make you feel good.” She said a friend undergoing chemotherapy set up Jeanine’s dolphin prints in her treatment room for comfort. The hospital in Menomenee Falls where she and Ed raised their family has Jeanine’s paintings on their walls.

When Betsy was in school all day, Jeanine returned to the University of Wisconsin part time taking two classes each semester. She graduated with a bachelor of fine arts at age 48. That was in 1978.

“I loved every minute of it,” she said. “It didn’t make any difference to me that it was taking a while. I was in no hurry.”

Jeanine’s art was a constant by then as Ed taught school and wrote books. Many a winter the couple rented space in Oregon to visit Betsy who had taken a job at KEX Radio in Portland. During one of their stays, Ed suffered a stroke, and the pair moved to an assisted living facility.

“There are a lot of good, interesting people here, and wonderful activities,” said Jeanine. “I am a people person, and that’s why I live here.”

In May, Jeanine’s work was displayed outside the Manor’s May Café, and she is considering teaching a class to residents. She is writing her third book about art. There are several large canvasses in her apartment upon which she has sketched emerging scenes, some in colors she has never tried before. She is hoping to exhibit her work soon at the Hillsdale library, since her first exhibit was in her hometown library and she loves books.

“This one is a series on creation,” said Jeanine, unrolling a set of five prints. “It is interesting because I discovered something psychologically about myself. Every one of these paintings has an exit. There’s a place to go out. There is freedom.

“These guys are coming out of the water and they’re floating and they can get out; there’s always an escape, a place to move beyond. These characters started as horses and as they migrated to the sides of the frame, becoming a different sort of water-sky creature.

“They represent passages and freedom to me. You know, you can’t keep animals alive and healthy by putting them in a protected place; they need to be able to mix their genes freely to survive.”

Jeanine is on a brief painting hiatus while she mourns Ed. But she wants people to know that ideas don’t have an age limit.

“I think people ought to know that when you’re 92, creativity is still coming,” she said. “When Ed was sleeping, I had so many ideas in the evening. I think it’s healthy to see that older people can achieve.”

For information on Jeanine’s books, go to amazon.com or jeaninesdream.com.