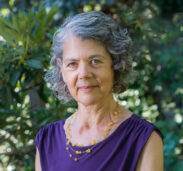 Cathy joined Cedar Sinai Park in 2019 to coordinate Jewish cultural and religious services and spiritual life for residents of all faiths. Previously, Cathy was a filmmaker (Living While Dying) and massage therapist and served as a lay leader and on the board at Congregation P’nai Or.

She grew up in West Los Angeles and left the University of California Santa Cruz to pursue her passion in filmmaking. She worked as camerawoman on many documentaries, and was a camera operator on the television show Murphy Brown before directing and producing Just One Step; The Great Peace March, a film about 500 people walking from L.A. to Washington, D.C. for global nuclear disarmament. She moved to Portland with her Lithuanian photographer husband and two daughters in 1991.

She loves her “family at Cedar Sinai Park” and responding to the needs of the residents and their families and being a part of creating and fostering spiritual connections.